When will I be presenting?

My first ever fully dedicated VR demo. Jupiter Omega was in a nice relatively polished condition albeit still a short demo which included the voice acting of VAP Squad. Once again I had a fairly solid line of people waiting to try out my game... people love VR! 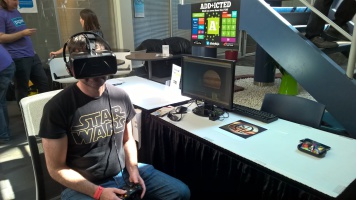 Brought my very very new VR project to show off and acquire some feedback on. I had line-ups of kids waiting to try it out as well as some adults. In the voice acting booth, I had provided the intro script to this game and they said they had quite a bit of fun running through it with some of the attendees. Based on the feedback I received from the demo I will definitely be continuing with this project and hopefully be able to work with Vap Squad to provide the voice acting component.

Presented a Lightning Talk (<10min) about my experience at MIGS15, with a focus on Execution Labs and what we as a community needed to do in order to create a better game dev industry in Alberta. The presentation went well and the discussion afterwards was positive. I feel that there are many game devs in our group that are interested in making some changes to how we organize game development in Calgary. I am hopeful that something good will emerge this year!

Oh yes and I was published in a real news paper today, the Calgary Metro.

For the second time I've secured a spot at the Microsoft Store in Chinook Mall starting at 1pm. Hopefully we'll get a bit more traffic this time as I will be showing off the Beta version of Words Cubed.

The presentation went well although I had hoped for a few more people would have come to try out our games. The Microsoft Store did an excellent job of hosting us though; providing announcements throughout the event as well as free beverages for the attendees.

Words Cubed was selected as 1 of the top seven entries to the Microsoft CodeName GOA contest. As a result I had the opportunity to travel to Montreal to not only attend but actually present my game to all the convention visitors from within the Microsoft booth. It was an amazing experience as I was situated right next to the Ubisoft booth where they were hosting an Assassins Creed tournament, not withstanding the chance I had to show off my baby to the thousands of gamers that came past me.

Alas I didn't place in the top 3 but I feel the exposure and feedback that I received was well worth the cost of a plane ticket.

Punch and Pie was the first time I had a real opportunity to showcase and present the game that I had worked on for AppCampus, Polyhegrams. Unfortunately due to inclimate weather and probably not enough advertisement we didn't have alot of people wander through. It was a good opportunity to see some of the other game projects that member of the CGDA were working on.

This year I teamed up with a game designer and a sound guy to create a game we called Heart Attack. This was an endless runner game where you had to navigate or destroy the many obstacles that rush towards your ship as you travel through a blood vessel towards the heart. The game pulses to the beat of the music which increases in pace as the game progresses. Our non-artist team of 3 was able to complete a fully working game using Unity3D within the 48 hours.

AppCampus was an initiative launched by Microsoft, Nokia and Aalto University to help spark the creation of innovative and unique apps for the Windows Phone store. AppCademy was a special offer that Polyhegrams was accepted into which brought me to Finland for a 2 week intensive training course. I wished I could have stayed longer as there was still much I needed to learn as far as marketing and the business side of game development.